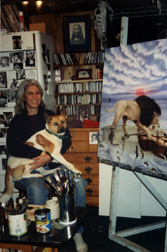 Strongly influenced by the realism of the fifteenth century Flemish and Italian masters, Gene uses her technical capability, combined with spiritual symbolism, to create a very realistic dreamtime world.

For Gene, the creative process begins with an impression, a fully developed image which is the inspiration itself. Little or nothing is done to change or interpret these original “ideas” or lucid dreams. The meaning of these symbols is up to the viewer.

“Symbolism, blankety blank, bring forth, bow wow mystical elegance, mozart!” Other than that, Gene really has very little to say. 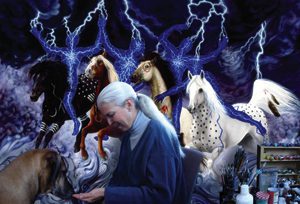 Most of her work is commissioned, or sold from her studio, with occasional public exhibitions in places such as the 1995 retrospective at the University of Texas Performing Arts Center in Austin, and the 2008 Northern California Visionary Art Exhibition at the Grace Hudson Museum in Ukiah, CA.

Oh, just show ’em a few pictures, then you don’t have to write anything!”
– Joe Ely

“The scale and vividness of Gene’s work creates a world so complete, so sensuous and tactile, you may actually step right into it with a feeling of familiarity as comfortable as your own dreams.”
– Michael Priest

“Gene is an extraordinary visionary who takes my breath away. Her paintings bridge the gap between the realms of fantasy and realism, leaving the viewer to savor the rare grace of pure pleasure. “
– Jamie Sams

“I believe Gene’s paintings inspire the viewer to connect in a meaningful as well as magical way with the earth and and its creatures. “
– Lisa Loverde

To purchase a painting, or to discuss commissioning works, please email Gene using this form